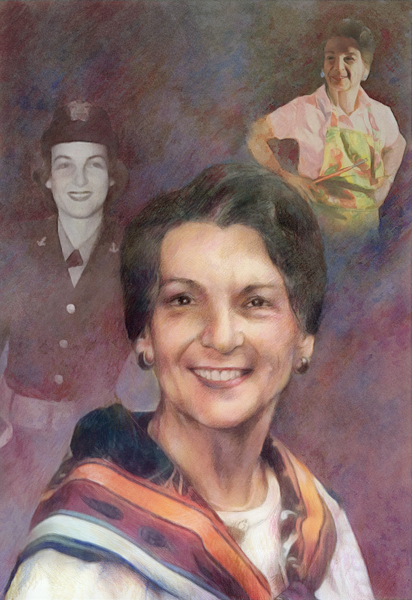 Navy veterans of World War II, Janice and her husband, Edmund, married in 1944, settled in Rocky Mount, and raised four children. Janice made international news in 1982 landing an airplane after her pilot husband died in flight. The New York Times and the FAA attribute that feat to a miracle of God.

She began writing and speaking to groups here and abroad. Her books include Won’t Somebody Help Me! and Ground Level Christianity.

A native of California, Janice graduated from UCLA with a degree in history and later attended UNC-Chapel Hill earning her teaching credentials. A prolific painter, she has painted almost all over the world, has had five solo art shows, and has been featured in the NC Museum of Art.

Janice is a member of the Colonial Dames of the Seventeenth Century. As Girl Scout Troop Leader for eight years, she received a commendation from President Jimmy Carter for having the first Girl Scout troop to successfully complete the Boy Scout dead-reckoning trail at Valley Forge.

She is a sustaining force for the National Day of Prayer activities for Rocky Mount augmenting those activities with the one day Public Bible Reading Aloud which has increased from ninety readers in 2013 locally to over one thousand readers locally, in other NC cities, other states and other nations. She was a Lay Speaker for the United Methodist Church, teaching Sunday School and singing in the choir. She was president of the United Methodist Women and served on the administrative board for the First United Methodist Church in Rocky Mount.

Janice has contributed to her country through her military service and to her state and community through civic and church organizations. She has shared her talents with writing and her paintings. She has lived a life of honor, integrity, and excellence and credits it to her active Christian life.