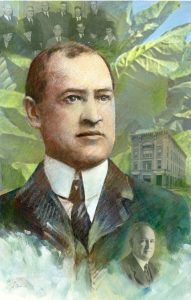 Tobacco grower and businessman James C. Braswell was a founder of the Rocky Mount Tobacco Market. He was a founder, first President and Chairman of the Board of Planter’s Bank, an institution he served for over 50 years. Beyond Rocky Mount, he served as a Director and Chairman of the Board of the Federal Reserve Bank of Richmond. In addition to leadership positions in numerous businesses, his extensive civic and community service earned him the title ‘Mr. Rocky Mount’.

Inducted into Hall of Fame 2016