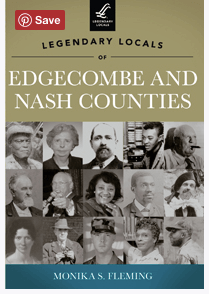 The rich agricultural land of northeastern North Carolina was originally settled in the mid-18th century and, in 1777, divided into two counties: Edgecombe and Nash. In 1818, the Battle family established a textile mill that remained in operation for more than 175 years and became the basis for the city of Rocky Mount. The Atlantic Coastline Railroad chose the area as its repair shop in 1899 and, at the turn of the 20th century, the area was booming. Diverse communities produced outstanding educators, groundbreaking physicians, and business leaders. Residents included Olympians, baseball hall of famer Buck Leonard, and basketball greats Phil Ford and Buck Williams. Creative citizens became award-winning musicians, painters, and writers, like novelist Kaye Gibbons and entertainer Kaye Kyser. Military service in conflicts from the Revolutionary War to the Iraq War included generals, admirals, and a Medal of Honor recipient. Legendary Locals of Edgecombe and Nash Counties celebrates some of the individuals who have left their mark. In her fifth book, local historian and educator Monika S. Fleming worked with the Twin County Hall of Fame, Braswell and Edgecombe libraries, and the Veterans Museum to identify these local legends.

Paperback, 128 Pages
Purchasing this book helps us achieve our mission and is greatly appreciated!